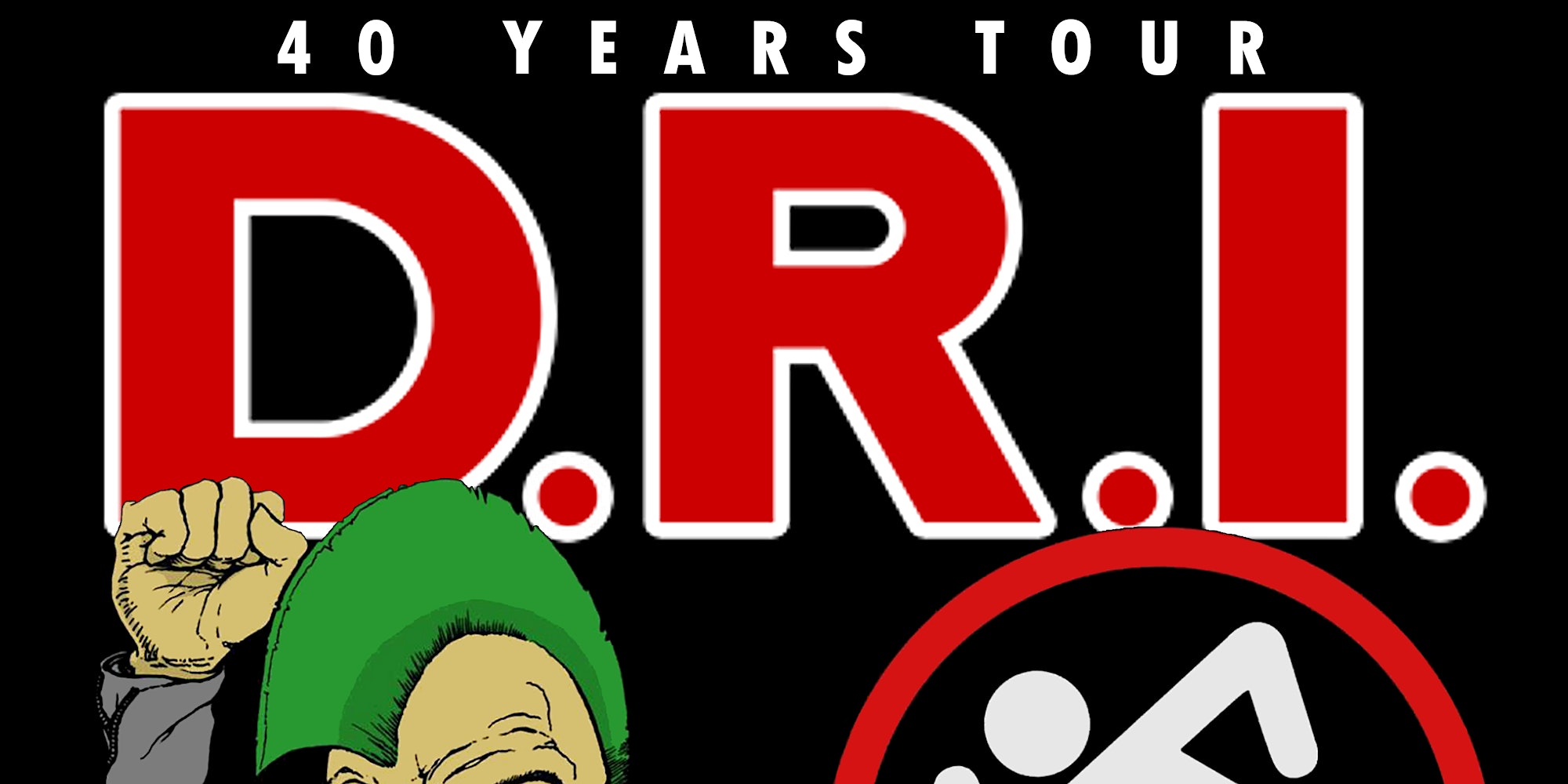 The DIRTY ROTTEN IMBECILES’ history begins on May 2, 1982 around 4:00pm, in the city of Houston, TX. It was on this day that the musically aggressive quartet we now know as D.R.I. made their first Dirty Rotten noise and called it a song.

On November 6th & 7th of 1982 D.R.I. recorded their first release, the Dirty Rotten EP, stuffing 22 songs into 18 minutes on a 7″ EP that played at 33 rpm’s. Only 1000 copies of this EP version were pressed, making it now a very rare collector’s item. Demand caused this EP to be pressed into a 12″ LP version, released in 1983, appropriately called Dirty Rotten LP. Leaving the underground music scene thriving for more, DRLP became a major success and also an Inspiration for many new bands at the time. Soon after D.R.I. was labeled the fastest band in the world.

In 1983 D.R.I. moved to San Francisco, where they lived in their van and ate at soup kitchens in between gigs. D.R.I. found themselves on the “Rock Against Reagan” tour with the Dead Kennedy’s. Their next release was the 4 song, 7″, Violent Pacification EP, in 1984.

D.R.I.’s second full length release, Dealing With It, came in March 1985. The group toured extensively in support of the album. The songs on DWI pointed slightly towards a metal direction, but still remained very hardcore. Almost legendary is the band’s recording of “Madman”, where Kurt’s dad is mad and disturbs a Rehearsal. The band gains a real cult status, supported by such fans as Dave Lombardo (Slayer), who tells everyone he’s influenced by D.R.I.

On April 26th, 1986, they recorded their show at the Olympic Auditorium in Los Angeles, and released the video, which was entitled “Live At The Olympic”.

Their third album, Crossover, released in 1987, was perfectly named since the songs on this album had a strong metal sound to them. As the band began to “crossover” to thrash, their songs became longer, slower, and more complex. The press has called D.R.I. the major band of the “crossover” movement, a style that combined punk, hardcore, and metal. This music invited a mixed audience of punks, and metal fans to their shows, who introduced things like stage diving and slam dancing.

The ‘Live at the Ritz’ video was recorded next, on June 27th 1987, at ‘the Ritz’ in New York, during the band’s worldwide Crossover tour. Also in 1987, one of their songs, ‘Snap’ appeared on a compilation (with other bands supporting some cause) entitled P.E.A.C.E.

In February of 1988, the Dirty Rotten Imbeciles returned to the studio to record Four Of A Kind. The songs on this album have even more of a metal sound to them, and production is the best it’s ever been. They even released a music video for the song ‘Suit and Tie Guy’. At the same time, the Dirty Rotten LP was remixed to include the songs from the Violent Pacification EP, and was re-released.

September 1989 brought the release of Thrash Zone. Two music videos were released from this album. One for ‘Beneath the Wheel’ and the other for ‘Abduction’.

During the spring of 1992, Definition was released, and a music video was released for the song ‘Acid Rain’, that later was even featured in an episode of MTV’s “Beavis and Butthead”.

D.R.I. toured in 1992, recorded their gig at the Hollywood Palladium on November 27th, 1992, and it was released in 1994 as their first live album, appropriately entitled Live. It was, more or less, “released as a stepping stone between Definition and Full Speed Ahead”.

In the fall of 1994, The group took part in the Lolitabazooka Tour, headlining in Canada.

In 1995, D.R.I. released their newest album called Full Speed Ahead. They also made another music video, this time for a song called ‘Syringes in the Sandbox’.

From 1996 to 2016 D.R.I. Tours the World extensively. In March of 1998 D.R.I. launched their own Official Website (www.DirtyRottenImbeciles.com). During 1999, D.R.I. appears as one of the headlining bands on the Social Chaos in North America Tour.

In the end of 2015 D.R.I. goes back into the recording studio with longtime friend and producer Bill Metoyer, and records and its first studio produced songs in two decades. The long awaited “But Wait There’s More” EP is released in June of 2016, and D.R.I. once again Tours the world in support of this milestone.

For the past 35 years, D.R.I. has been the epitome of the aggressive, hardcore-punk, thrash metal sound that we’ve all become accustomed to hearing. Throughout this time, they’ve been one of the few genuine underground bands to remain true to their pure punk roots. Still actively touring and recording, the only thing that may have changed is that they’re a little older now, but time hasn’t gotten the best of the Dirty Rotten Imbeciles. They’re still thrashing just as hard, and just as loud as ever, continuing to overload our senses with the sound that is, and 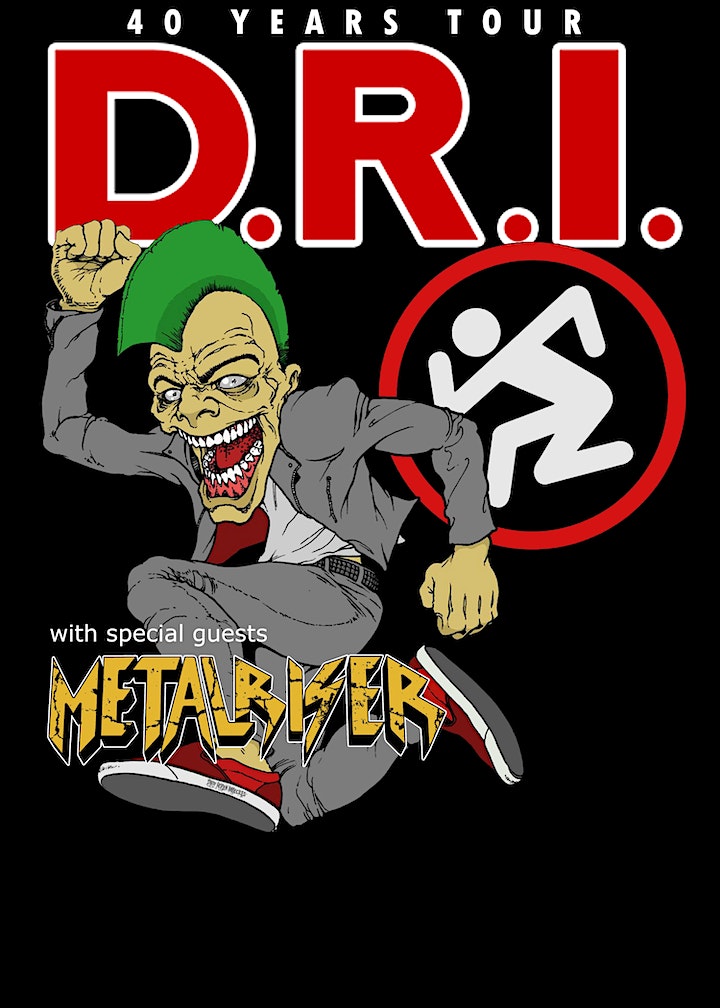