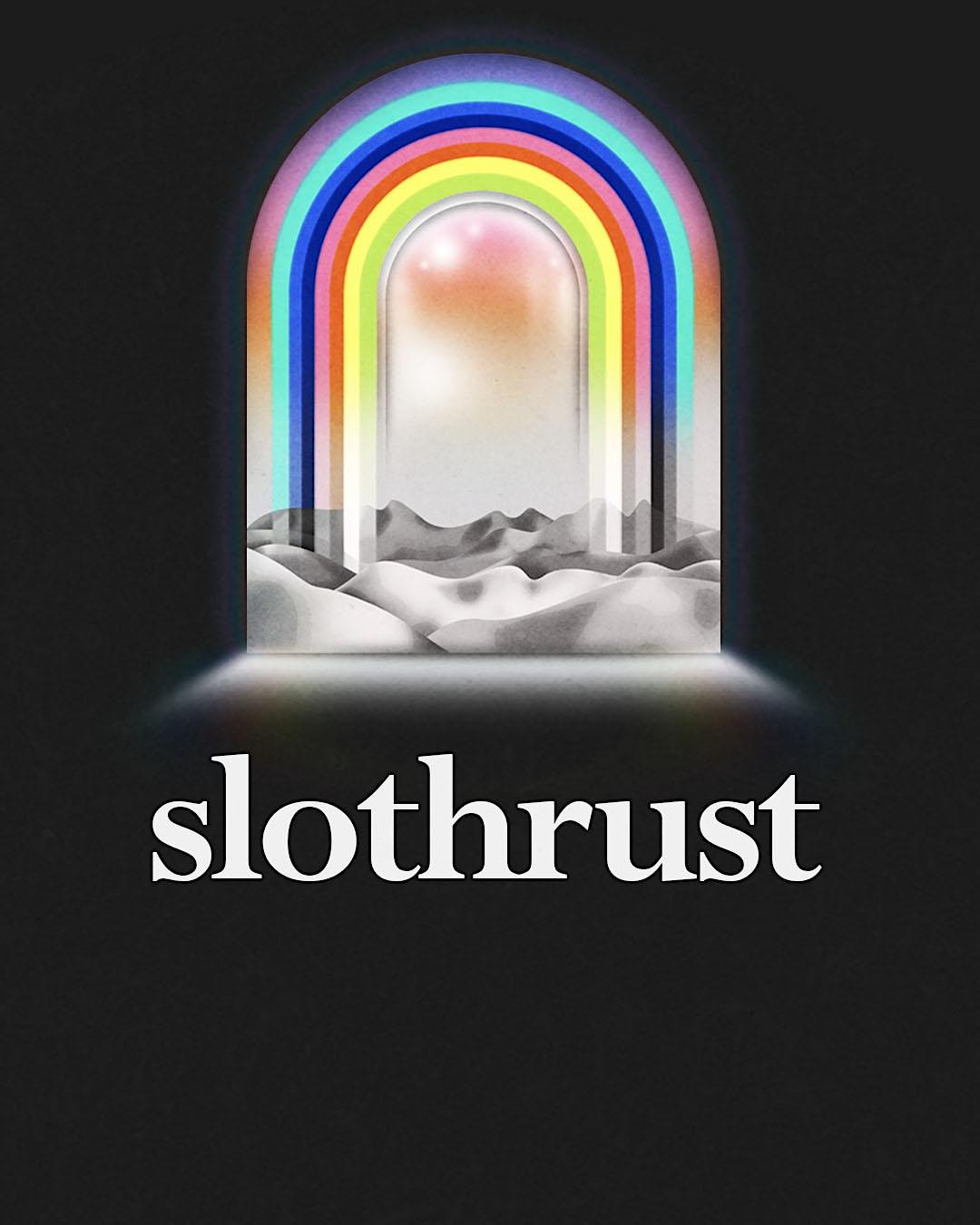 Leah Wellbaum has never been afraid of her own humility or honesty. But she’s never quite examined it the way she has now with Parallel Timeline.

On Slothrust’s latest album, bandleader Leah Wellbaum pushed herself to try and understand her own spirituality on a deeper level, putting a lens on the core wound of the human experience, the idea that we’re alone. With Parallel Timeline, Wellbaum explores the feeling of being trapped inside her own consciousness while simultaneously searching for a meaningful connection to the universe, and all the mysteries it contains.

During the writing process, Wellbaum sought to connect with her inner child – a voice that allows ideas to flow freely and without censorship. Ultimately, it allowed her to find poetic catharsis. The album’s artwork and visuals reflect that ethos as well. For her, inverted colored rainbows and orbs became a gateway to exploring the illusory things we see and experience in everyday life. The iconography of this record explores the space where science and the whimsical intersect, and where the unfamiliar becomes hardly recognizable. She is a strong believer that nothing is quite as it seems, and that a greater reality exists beyond what the human eye can see.

In advance of recording their fifth studio album, Leah, along with drummer Will Gorin, sought to dramatically expand the band’s sonic palette. Slothrust put an emphasis on incorporating new production techniques and processes into the established Slothrust sound, resulting in an extraordinary amount of experimental demo recordings, many elements of which appear themselves on the final record. They leaned into risk-taking — a freedom that comes with having been in a band together for more than 10 years, cultivating new sonic realms for each track. Leah sought to craft unique and calculated guitar parts instead of continuous bursts of wall-to-wall sound, and in turn delivers what will likely be considered a “how-to manual” for guitar playing in the next decade.

“On this record, I wanted to be even more precise with the guitar parts as opposed to creating a guitar palette, because a lot of artists, us included, have made songs that are so chock-full of guitar that distinct parts becomes a blur,” says Wellbaum. “I enjoy making that choice when it’s right but it’s the contrast of those things that I like to lean into. I strive to make the guitar sing like a human voice.”

Educated musicians all with backgrounds in classical, jazz and blues, the band’s newest work once again sees Slothrust leaning into improvisation — something that in the past has lent itself to the infectious energy of their live shows. Parallel Timeline, mixed by industry legend Billy Bush and mastered by Heba Kadry is a masterclass in balancing tenderness with the fierce guitar work Leah has become known for. With a distinct yet unified sound that blends progressive rock, acoustic and pop, Slothrust has never been more confident.

The backbone of the 10-track record is Leah’s spiritual journey and presence as a guitar god. Opener “Cranium” features a blues-tinged guitar solo inspired by Funkadelic’s “Maggot Brain” that is so expressive it sings. ““The song addresses absurd ways to love someone or something, and feels very on-theme with things not always being what they appear at first,” says Wellbaum of the track. “It also touches on tenderness being painful, which I think is very true of me as someone who has spent a lot of my life trying to be very tough.”

With catchy grunge-rock jaunt “Once More For The Ocean” and the slow-burning ballad “King Arthur’s Seat,” Leah didn’t have access to an instrument when she wrote them. Instead the lyrics, she felt, were channeled through her as she stared into nature, reflecting the idea of oneness that she was searching for. Inspired by both Scotland and Billy Joel, “King Arthur’s Seat” also “addresses this core human wound that will come up time and time again for all of us, which is the feeling of being alone and separate and not really knowing what to do with that,” Wellbaum says.

With soaring guitar-riffs and Leah’s twinkling harmonies, the ethereal “Waiting” further contemplates the idea of wanting to heal yourself but not knowing how. In the track, connecting with nature – in this case, birds — is a balm. Penned with singer Donna Missal, “The Next Curse” was intended to be a “spell,” but it ended up being a curse. Flanked by thunderous guitars and Leah’s haunting vocals, the blistering rock anthem explores how even among the world’s destruction we still don’t take the time to take care of ourselves: “Earth’s gonna set on fire/But still I wait.” Producer Billy Bush’s influence shines on this track with burly guitars, Leah’s haunting vocals, and a fantastic display of vocal harmony in a feature from Halestorm singer Lzzy Hale. “Billy has that perfect balance of someone who is just easy to be around, totally gets the joke and is available to laugh and chat, but also is incredibly focused,” says Wellbaum. “His ears are magical.”

Slothrust shines particularly within its softer moments on the record. “Strange Astrology” is a stripped-down love song dedicated to Leah’s girlfriend of six years that meditates on astrological compatibility. The hymnal “Courtesy” ties into the record’s overall theme of spirituality and desire to feel connected. “I won’t ask you again if you give it to me/I won’t say it again if you get it the first time,” Leah sings.

While the majority of songs were written pre-pandemic, “A Giant Swallow” was not. The lullaby-like acoustic track unites the record and serves as a roadmap for Slothrust’s previous work, referencing lyrics spanning as early as their first record. Recalling the sweet harmonies of “Courtesy” and “Waiting,” Leah reflects on her search for the unified space. “I’ll return to the ocean/Return to the womb again/Inside of the Mother/Won’t have any questions then,” she sings with a gentle lilt. – Ilana Kaplan 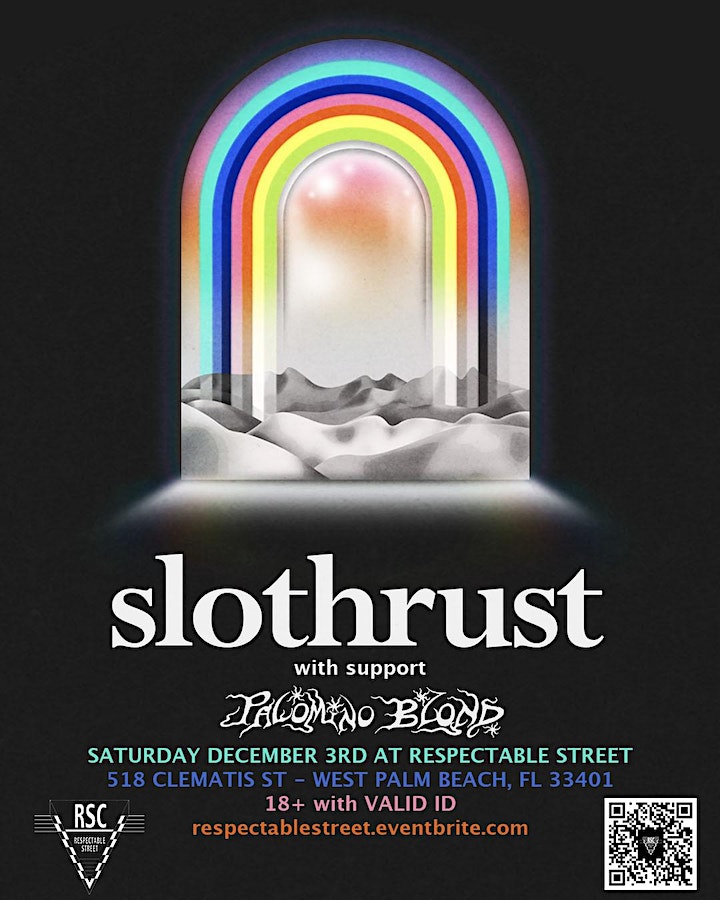