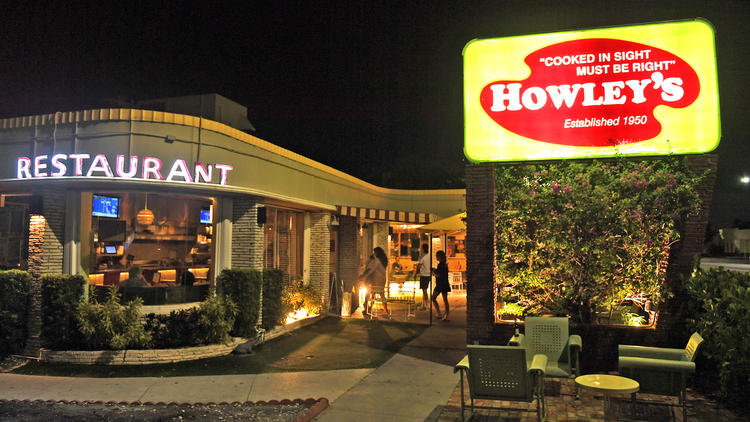 SouthFlorida.com: Out Late and Hungry?

Hullabaloo: A chunk of SoHo chic sits on Clematis Street in downtown West Palm Beach and goes by the name of Hullabaloo. Like its big-city kin, the venue is sophisticated, lowly lit and up late — 1 a.m. during the week and 3 a.m. Thursday, Friday and Saturday.

Framed portraits of dead rock stars hang on a matte-white brick wall that lines the restaurant from front to back. Diners can ponder the musicians’ legacies while looking over a late-night drink menu in which cocktails share names with song titles. Tom Petty’s “You Wreck Me Baby” inspired a drink made of Buffalo Trace bourbon, pineapple rum, Pedro Ximinez, sherry, orange and cardamom bitters. Merle Haggard’s “The Bottle Let Me Down” loans its name to a drink consisting of Old Forester Bourbon, Amaro Nonino, Bitter Truth Golden Falernum and Scotch Mist. No matter the artist, all drinks cost $13.

“We’ve gone through about 50 rock stars in the six years we’ve been open.” says chef Fritz Cassel, who prides himself on the menu’s fire-roasted Brussel sprouts and fire-roasted chicken meatballs. Portions come in medium and large sizes. Other interesting late-night menu items include roasted bone marrow, speck ham pizza, a roast pork sandwich, a charcuterie board and the Hullabaloo burger.

Howley’s: If a 1950s diner, an artist-driven coffeehouse and an Airstream travel trailer somehow had a love child, it would be Howley’s restaurant. Jalousie windows and putt-putt golf greet visitors walking up to the front door. Original terrazzo floors frame the open, stainless-steel kitchen inside.

Established in 1950 by Patrick J. Howley, the restaurant has had only three owners. Through the years, it has kept one soft foot in the era of Marylin Monroe, with a long Formica counter, layer cakes under glass and curved corner window seating.

New art is everywhere from local artists, some uplifting, some dour, some just plain odd. Hula lamps and star-rocket chandeliers light the conversations of young and old, local and tourist until 5 a.m. Fridays and Saturdays, and 2 a.m. the rest of the week.

Acai bowls and fresh-squeezed celery and pear juices appear on the menu next to vintage cocktails such as Harvey Wallbanger, mai tai and boozy Pink Squirrel milkshake. Long gone is the greasy-spoon menu, replaced by organic ingredients prepared in a scratch kitchen without microwave ovens.

Howley’s is known for its daily specials modeled after TV dinners.

“We have a different TV dinner for every day of the week,” manager Kristen Morris says. “It takes people back to ones their mom used to make with the little tinfoil tray. They ask if it comes in a compartment tray, and it actually does.”

Dada: It seems as if Dada has been on the corner of Swinton Avenue and Northwest First Street since long before 2000, when the restaurant opened.

That’s because it has been. Dada resides inside the historic Tarrimore house that was built circa 1924. The original house is basically intact, with a second story added in 1939. As with most homes, the living room is a hub of activity. On any given night, aspiring poets, musicians and artists preform in front of a brick fireplace as guests watch from the bar and tables in nearby, semi-private rooms. Vintage wavy glass windows next to the mantle shimmer and light the bar. In the back-room dining area, classic cult films are projected on a wall, creating an arthouse experience. “Dr. Strangelove” with tabbouleh? No problem. Front yard dining is available under a banyan tree or on the porch, weather permitting.